A game that has won recognition from users in more than 130 countries and it is My talking Tom on the phone!

Everyone probably already knows such a game as " Talking Tom Cat" where the cat repeats everything that you tell him, so in the new game My Talking Tom you can not only chat with the cat, but also participate in its development. That is, you will start the game for a cute kitten that you will give your name to and make it a part of your daily life, feed it, play with it and raise it as it grows up. The game " My Volume " is a kind of Tamagotchi, like Pou – a game that is played by millions! 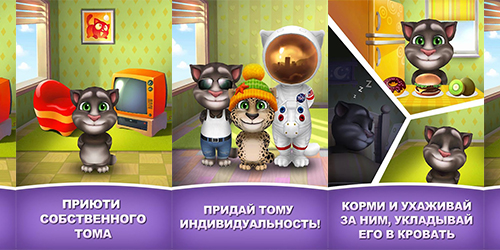 Of the main features in the game, it is worth highlighting the ability to dress your cat in different outfits, feed the cat, put it to bed, take it to the toilet, change the color, equip the house.

So that the cat's house is not boring, you will have a lot of items at your disposal with which you can furnish it, and if you have a bad imagination, then you can spy on how your friends do it, for example.

So that your cat does not get bored, you should play with him in various mini-games that develop memory or just give happiness. There are a lot of such games, for example, "Beat the mice". For winning, you will receive coins that you can spend on clothes, for example.

The game also features video shooting, with which you can capture your cat and share the recording with other players.

And finally, do not forget to talk to your cat, this is the main feature in the game, because everything that you tell him, he will repeat in a very funny voice!

In total, you will have to overcome 999 levels in nine different stages in the game, receive rewards, coins and achievements.

The result, the game My Talking Tom for Android is one of the best games in the style of "Tamagotchi". We recommend that all fans of the game Pou and the talking cat play. We LivePDA give 5 points to the game!

My talking Angela for Android